Written by Mel Wild for “In My Father’s House”  @  https://melwild.wordpress.com

Some skeptics say they can’t believe in God because He can’t be proven. They ask why, if God exists, He makes Himself so mysterious and hard to find? Others say there’s no physical evidence for this immaterial God. Of course, there wouldn’t be physical evidence, would there.

Faith is about trust, which deals with the deepest issue in humankind. If you believe the story, trust was the issue with God from the very beginning in the Garden.

Of course, faith and trust are more than just believing something is so. There is a commitment to trust. Let me illustrate what I mean with an old story.

The world’s greatest tightrope walker was going to cross Niagara Falls, not only on a tightrope, but by pushing a wheelbarrow. This stunning feat made Charles Blondin famous in the summer of 1859. According to the report, Blondin pushed a wheelbarrow across Niagara while blindfolded on a tightrope 160 feet above the water. After successfully crossing the falls, he asked for some audience participation. He had already proven he could do it, now he asked if anyone thought he could do again. It is said that he asked his audience:

“Do you believe I can carry a person across in this wheelbarrow?”

Of course the crowd shouted that “Yes, they believed!” It was then that Blondin posed the salient question:

“Who will get in the wheelbarrow?”

And that’s the issue, isn’t it. We might even see something with our own eyes and still not trust in it. We won’t commit to it.

But it’s faith that trusts in something…or someone…even when we can’t see it.

3 By faith we understand that the worlds were set in order at God’s command, so that the visible has its origin in the invisible. (Heb.11:3 NET)

I just finished a series (“Classical Arguments for God“) that logically shows the necessity for a Prime Mover, a “most fundamental cause” for our continuing existence. This agent must necessarily be immaterial or invisible, transcending our little world of time and space. This is simply true by logical deduction. Yet, even when shown the logic, people still will not consider it.

For example, as I said in “God is not a god” classical theists believe this to be true about our continuing existence:

Whereas, atheists seem to believe this to be true about our continuing existence: 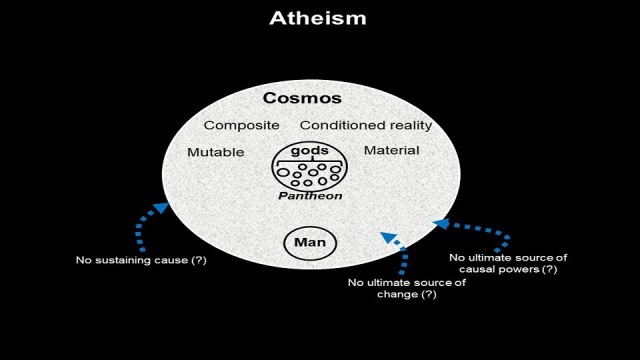 (Graphics by Mathoma, from “A Defense of Classical Theology“)

Apparently, some will believe in anything that can be reasonably and logically argued…as long as it’s not “God.”

But, still, everyone has faith in something.  Those who don’t believe in God may have faith that the material world is all there is, even though it cannot be proven by science and we can logically deduce that it isn’t all there is. They can have faith when science tells them that things are true even when these things can only ever be shown mathematically. They have faith in theories that have little or no empirical evidence to support them, or have faith that the invisible laws of nature will continue as they have for millions of years.

We, Christians, have faith that God is the one who holds all these things together, and I’ve shown that we have logic and reason to back it up.

16 For in him all things were created: things in heaven and on earth, visible and invisible, whether thrones or powers or rulers or authorities; all things have been created through him and for him. 17 He is before all things, and in him all things hold together.  (Col.1:16-17 NIV)

We all exercise faith everyday. So, it’s not a matter of faith as much as it is about trust. Something to think about.