Question: “What are the seven deadly sins?” 6/21/2018 Posted by www.gotquestions.org 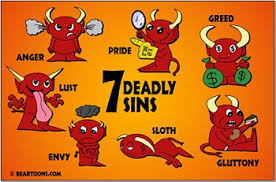 Question: “What are the seven deadly sins?”

According to Catholic theology, the seven deadly sins are seven vices or negative character qualities that, left unchecked, will result in a host of other sins and eventually kill a person’s soul. The seven “deadly” sins are pride, envy, gluttony, lust, anger, greed, and sloth. The list was first delineated by Pope Gregory the Great in the sixth century. Thomas Aquinas later expounded on the idea. In the fourteenth century, Dante wrote his epic poem Inferno in which he pictured Purgatory as having seven terraces corresponding to the seven deadly sins.

Here is a brief description of each of the seven deadly sins:

Pride — An inflated, unrealistic sense of your self-worth.

Envy — The feeling that you deserve the possessions, success, virtues, or talents of another person.

Gluttony — An excessive desire for the pleasure of eating and drinking.

Lust — A selfish focus on sex or a desire to have sexual pleasure with someone other than your spouse.

Sloth — Lack of effort in the face of a necessary task, causing it to go undone (or done badly).

Is the idea of seven deadly sins biblical? Yes and no. Proverbs 6:16–19 lists seven things that are detestable to Him: 1) haughty eyes, 2) a lying tongue, 3) hands that shed innocent blood, 4) a heart that plots evil, 5) feet that are quick to rush to do wrong, 6) a false witness, and 7) a man who stirs up dissension among brothers. Of course, this list is not what most people understand as the “seven deadly sins.”

Yes, pride, envy, etc., are sins that the Bible condemns; however, they are never called “the seven deadly sins” in the Bible. The traditional list of seven deadly sins can function as a way to categorize the many different sins that exist. Nearly every sin could be placed in one of those seven categories.

In the final analysis, no sin is any more “deadly” than any other sin. All sin results in death (Romans 6:23). Even one sin condemns a person as a lawbreaker (James 2:10). Praise be to God that Jesus Christ took the penalty for all of our sins, including the “seven deadly sins.” By the grace of God, through faith in Christ, we can be forgiven (Matthew 26:28; Acts 10:43; Ephesians 1:7).

Recommended Resource: Experiencing the Cross: Your Greatest Opportunity for Victory Over Sin by Henry Blackaby

P.S. (from bruce)   If you are not a “born again” Christian, is the Holy Spirit urging you to open this link ??  Here is the truth for this most important days writing, about how God’s grace is received to become a Christian in God’s eyes. This, after the Holy Spirit changes your will to understand and then obey the Gospel of our Lord Jesus Christ…    https://godsmanforever.com/2016/12/19/the-gospel-of-our-lord-jesus-christ-12182016-written-by-bruce-r-mills/