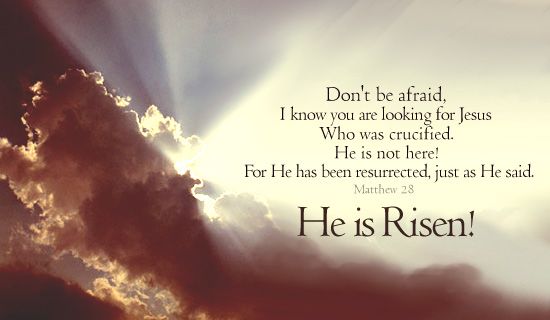 Matthew 28:5-7…  But the angel answered and said to the women, “Do not be afraid, for I know that you seek Jesus who was crucified. 6 He is not here; for He is risen, as He said. Come, see the place where the Lord lay. 7 And go quickly and tell His disciples that He is risen from the dead, and indeed He is going before you into Galilee; there you will see Him. Behold, I have told you.”  (NKJV)

Can you imagine how Mary Magdalene felt when she got to Jesus’ tomb, and He was gone ??  Had Jesus’ body been stolen ??  We see in the opening scripture, that the angel gave the women the great news !!  She and Mary, (called the other Mary, in…Matthew 28:1) left the tomb with fear and great joy; and ran to tell Jesus’ disciples this great news that “He is risen”… (Matthew 28:8)…  We read in the Book of Mark, that Jesus appeared first to Mary Magdalene (Mark 16:9), and when she returned to tell Jesus’ disciples the good news, at first they did not believe…Mark 16:10…

As we celebrate Jesus’ resurrection today, on this Resurrection Sunday…many of us will have already heard the gospel (meaning “Good News) message of our Lord Jesus Christ, that was shared this past Good Friday in memorial services everywhere… [This year on Zoom or a UTube video for many people]

And this “Good News” message of the cross will be shared again today, on the internet or TV, in many churches throughout the world…  Jesus’ defeat of death and Satan as Jesus rose from the grave, has given hope to all of those who have been graced by God with salvation, through saving faith alone in the Lord Jesus Christ…

Ephesians 2:8-9…  For by grace you have been saved through faith. And this is not your own doing; it is the gift of God, 9 not a result of works, so that no one may boast.  (ESV)

Did you hear this message of the cross, and praise God for sending His Son Jesus to be the propitiation for your sins…

1 John4:10… In this is love, not that we loved God, but that He loved us and sent His Son to be the propitiation for our sins.  (NKJV)

All of us are sinners from birth (Romans 3:23)…ever since Adam and Eve were deceived by the serpent (Satan) in the Garden of Eden, as recorded in…Genesis 3…  And Satan still has many people blinded today, who do not believe or understand this message of the cross…

2 Corinthians 4:3-4…  But even if our gospel is veiled, it is veiled to those who are perishing, 4 whose minds the god of this age has blinded, who do not believe, lest the light of the gospel of the glory of Christ, who is the image of God, should shine on them.  (NKJV)

None of us will ever be good enough in God’s eyes, because of anything we do on our own, to be deemed righteous enough (Isaiah 64:6) to enter heaven…no matter how much church we attend…no matter how many good works we do in the name of the Lord (Matthew 7:21-23)…or no matter how good of a person we are…  This is why God had to send His Son, the only sinless Man to ever walk the earth…to take upon Himself the sins of those who are first drawn in by God the Father (John 6:44)…and graced with salvation…

God uses His redeemed children to share this message of the cross to those in need of hearing this “Good News” gospel  message of our Lord Jesus Christ…  Faith comes by hearing, and hearing by the Word of God…

Romans 10:15 & 17…  And how shall they preach unless they are sent? As it is written: “How beautiful are the feet of those who preach the gospel of peace, Who bring glad tidings of good things!”  17 So then faith comes by hearing, and hearing by the word of God.  (NKJV)

If you believe you are a Christian headed for heaven, because of anything you have done in your own strength…then you are still blinded by Satan, and this message of the cross will be foolishness to you…  The apostle Paul tells us this, in…

1 Corinthians 1:18… For the message of the cross is foolishness to those who are perishing, but to us who are being saved it is the power of God.  (NKJV)

The apostle Paul goes on to tie in “those who are perishing“, with those who do not know Jesus Christ as their personal Lord and Savior…because they have not understood and obeyed the gospel of Christ…in the following scripture, in…

1 Thessalonians 1:8-9… in flaming fire taking vengeance on those who do not know God, and on those who do not obey the gospel of our Lord Jesus Christ. 9 These shall be punished with everlasting destruction from the presence of the Lord and from the glory of His power,  (NKJV)

My friends, if you heard the gospel “Good News” message of the cross…and it still seems like “foolishness” to you…then please speak to a believer that will be able to sit down with you, to share and explain this “Good News” message of the gospel of our Lord Jesus Christ…  But you must understand that God wants you to come to Him with a repentant and contrite heart….seeking Jesus Christ to be your personal Lord and Savior with  ALL of your heart…ALL of your mind…and ALL  of your soul…  (See note at the end for more on God’s grace through saving faith in Jesus Christ)…

Heavenly Father, we thank You so very much for sending us Your only Son Jesus Christ, to take on the past, present and future sins of Your redeemed children…and replace those sins with the perfect righteousness of Your Son Jesus Christ…2 Corinthians 5:21…  I pray Father, that You would draw those in need of Your saving grace to Yourself (John 6:44), and that through Your good news message of the cross…unbelievers would look to Christ and repent of their sins with a regenerated heart, that is filled with the love of Your Son Jesus Christ…  We thank You Father for what this Resurrection Sunday truly means…and pray for lives to be transformed by Your grace and Your mercy, in Jesus’ most precious name and for His sake…Amen…

P.S. When there is no other place to turn…turn to God !!  If you’re not a “born again” Christian, is the Holy Spirit urging you to open this link ??  Here is the truth for this most important days writing, about how God’s grace is received to become a Christian in God’s eyes; through understanding and obeying the Gospel of our Lord Jesus Christ…   https://godsmanforever.com/2016/12/19/the-gospel-of-our-lord-jesus-christ-12182016-written-by-bruce-r-mills/

I present posts about God's Word, with a personal focus on how God's grace is received through saving faith in the Lord Jesus Christ... Sinners must understand and obey the Gospel of our Lord Jesus Christ... See this link for more... https://godsmanforever.com/2014/10/26/the-truth-about-sin-10262014-by-bruce-reposted-from-7112013/
View all posts by Godsmanforever →
This entry was posted in Christ has Risen, Daily Devotion and tagged Christ has Risen, christianity, Easter, Resurrection Sunday. Bookmark the permalink.