Posted on September 7, 2019 by Godsmanforever

Written by Mel Wild for “In My Father’s House” @ https://melwild.wordpress.com 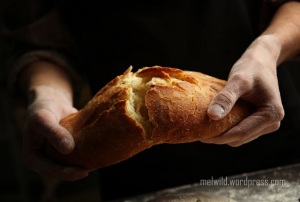 Many things that God wants to reveal to us only happen after we’ve opened our hearts and have Him “sup” with us. But I’m not talking about eating food. Last time, I talked about how our life in Christ must be experienced, like a fine cuisine, we must allow Jesus to dine with us, metaphorically speaking.

We are invited to “Taste and see that the Lord is good.” (Psalm 34:8). But, as I said before, much of Christianity today is merely looking at the menu and not actually partaking in Christ.

Today, I want to look at a story in Luke 24 about the two on the road to Emmaus (Luke 24:13-35). This takes place on the day of Jesus’ resurrection. Apparently, the resurrected Jesus joins these two men on their journey but it says “their eyes restrained” (vs.16)

What’s interesting about this is how something true can be right in front us, even talking to us, yet we still don’t see it.

Here’s my take on this: when our expectations of what we think God should be doing doesn’t agree with what He actually is doing, we become blind. Read their testimony of disappointment:

21 But we were hoping that it was He who was going to redeem Israel. Indeed, besides all this, today is the third day since these things happened. 22 Yes, and certain women of our company, who arrived at the tomb early, astonished us. 23 When they did not find His body, they came saying that they had also seen a vision of angels who said He was alive. 24 And certain of those who were with us went to the tomb and found it just as the women had said; but Him they did not see.” (Luke 24:21-24*)

Obviously, these two had been there with the others when the women reported that the tomb was empty, yet they did not believe because they had no mental grid for what was happening. Remember, these are the group of men who, when the women reported the tomb empty, responded thus: “And their words seemed to them like idle tales, and they did not believe them.” (Luke 24:11)

They expected Jesus to come and conquer their Roman oppressors, but He came to do something much more profound—to conquer the real oppressors of all humankind, sin and death—and to bring us into fellowship with His divine life (2 Pet.1:4).

Now, let’s get to my main point. First, here’s the main passage I want us to look at:

28 Then they drew near to the village where they were going, and He indicated that He would have gone farther. 29 But they constrained Him, saying, “Abide with us, for it is toward evening, and the day is far spent.” And He went in to stay with them. (Luke 24:28-29*)

At this point, Jesus has expounded on the Scripture, starting with Moses, concerning this whole thing. But my question is this: what would have been their experience if they had not compelled Jesus to stay with them? (See vs.29 above.)

Looking at the passage, they would’ve had an awesome exposition of Messianic prophecy…but they still would not have believed.  They were still blind to who they were talking to.

So, when were their eyes opened? When they broke bread with Jesus:

30 Now it came to pass, as He sat at the table with them, that He took bread, blessed and broke it, and gave it to them. 31 Then their eyes were opened and they knew Him; and He vanished from their sight. (Luke 24:28-31*)

After this encounter, we see quite a different perspective on the day’s events when these two return to their brethren:

33 So they rose up that very hour and returned to Jerusalem, and found the eleven and those who were with them gathered together, 34 saying, “The Lord is risen indeed, and has appeared to Simon!” 35 And they told about the things that had happened on the road, and how He was known to them in the breaking of bread. (Luke 24:33-35*)

I love how these two are simply saying what the women were trying to tell them in the first place. A funny aside on that: this kind of thing happens to me all the time. I get a “revelation” from God and then proceed to tell my wife something she’s been trying to get me to see this for years! But I digress…

Of course, I’m not talking about literally having a meal with Jesus here. I’m talking about communing with His indwelling Spirit. And this divine culinary experience is available to us every moment of every day.

As my friend, Andy Hayner says, “Heaven is live-streaming 24/7!”

Jesus invites us to “Taste and see,” to open the door of our hearts to Him. Because when we “taste” His goodness, we finally have eyes to see and ears to hear the wondrous things God reveals to us by His Spirit that have not “entered the heart of man” (1 Cor.2:9-10) and go beyond “all that we ask or think” (Eph.3:20):

20 Behold, I stand at the door and knock. If anyone hears My voice and opens the door, I will come in to him and dine with him, and he with Me. 21 To him who overcomes I will grant to sit with Me on My throne, as I also overcame and sat down with My Father on His throne.

I present posts about God's Word, with a personal focus on how God's grace is received through saving faith in the Lord Jesus Christ... Sinners must understand and obey the Gospel of our Lord Jesus Christ... See this link for more... https://godsmanforever.com/2014/10/26/the-truth-about-sin-10262014-by-bruce-reposted-from-7112013/
View all posts by Godsmanforever →
This entry was posted in Communion brings revelation, Daily Devotion and tagged Communion, Gospel, Grace, Open heart and mind. Bookmark the permalink.