Posted on December 29, 2019 by Godsmanforever 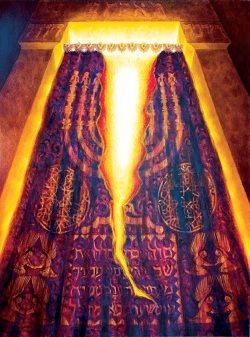 I doubt that you need me to go through the details of Matthew’s text concerning Jesus’ scourging and crucifixion, for you can probably tell the story yourself, and there is always the link to the text itself. Nor am I inclined to indulge in the gruesome and macabre business of reciting the violent and bloody details so as to encourage a sense of guilt and self-loathing among my readers, for to do so is, sadly, to miss the point of the events on that most fateful of days.

On that day, as on all other days, a priest stepped out onto the highest point of the Temple, ready to blow his horn at exactly three o’clock. This was done every day to announce the sacrifices that reminded the people that God was faithful to keep His promise to deliver Israel from their sins. Unbeknownst to the priest blowing the horn, the real action on that day of days was taking place a short distance away at a location known as Golgotha, the place of the skull. For at Golgotha, the Son of God cried out and gave up His Spirit, in the last and final sacrifice of the Old Covenant− at that very moment, God fulfilled His promises to both Moses and Abraham, and completed His act of ultimate redemption. It was the dawn of a whole new age, the last age of this world.

As the hour approached, the skies had begun to darken. The taunts of the Jewish leaders that had begun when Jesus was nailed to cross, had died down; many people had gone home thinking the spectacle was pretty much over; there was a sense of unease among those who had remained. Jesus quoted the 22nd Psalm near the end, and again there was a buzz in the crowd that remained; was He calling for Elijah to save Him?

But Jesus did not need saving, He was the Savior!

At the moment of His death, God springs back into action; there is an earthquake, and although the people at Golgotha didn’t know it yet, the veil in the Temple that barred entry into the Most Holy Place, the barrier that had separated all of humanity from God’s presence, had been torn open, for no longer was Mankind to be kept away from God.

In stark contrast to the ridicule of the Jewish leaders who should have known better, pagan Roman soldiers shame them by calling out that Jesus was indeed the Son of God!

The events of that day were of such magnitude, that it would take mere humans quite some time to process them.

I present posts about God's Word, with a personal focus on how God's grace is received through saving faith in the Lord Jesus Christ... Sinners must understand and obey the Gospel of our Lord Jesus Christ... See this link for more... https://godsmanforever.com/2014/10/26/the-truth-about-sin-10262014-by-bruce-reposted-from-7112013/
View all posts by Godsmanforever →
This entry was posted in Daily Devotion, God Keeps His Promises and tagged God Keeps His Promises. Bookmark the permalink.