Posted on April 6, 2020 by Godsmanforever 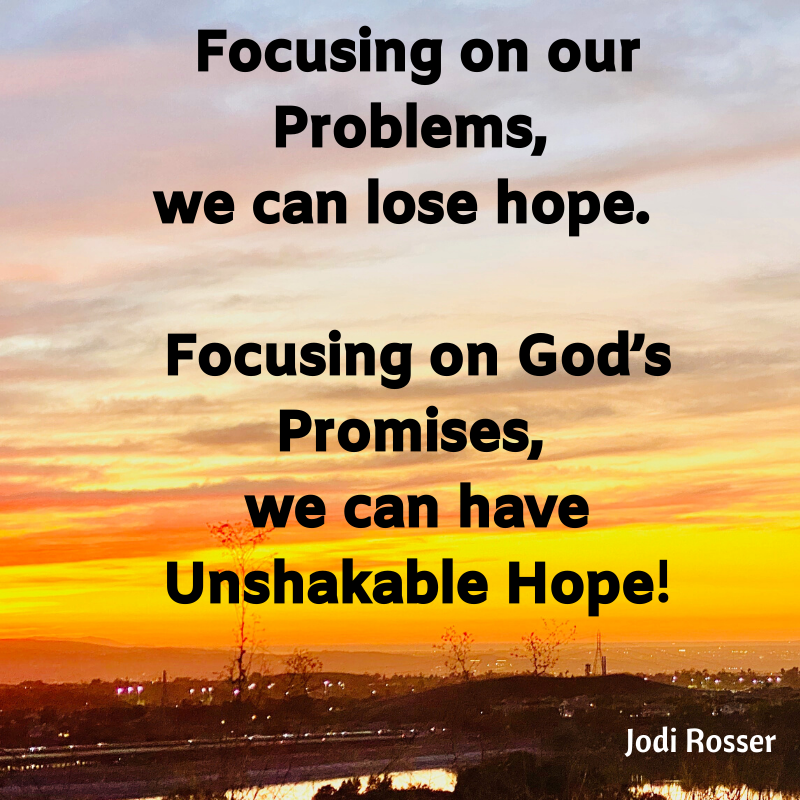 Written by my friend Bill Sweeney, stricken with ALS 23 years ago.  He now writes by use of an eye-tracking computer, with only his eye movements.  Bill’s “Unshakable Hope” should give us all a reason to count our blessings !!  (bruce)

The War Of Faith

Mary and I learned this lesson twenty-three years ago when diagnosed with ALS. My health was taken from me, and I lost my career. We sold our home and the family van. Every aspect of our lives, every worldly hope we had, was shaken and crumbled because the motor neuron cells in my brain were dying off.

Hopefully, not to the same extent, but many of you are feeling what we went through so many years ago. Can you see what’s happening?

Putting hope in God through Christ is the only Unshakable Hope that exists. If you don’t know this hope, I pray that you’ll become a follower of Christ today. In the midst of this chaos, God is shouting to you. He’s telling you that He loves you and that He gave His only begotten son so that, regardless of what’s happening in the world, you can find joy, peace, and hope in this life, and for the next.

“We can ignore even pleasure. But pain insists upon being attended to. God whispers to us in our pleasures, speaks in our conscience, but shouts in our pains: it is His megaphone to rouse a deaf world.” – C.S. Lewis

Of course, followers of Christ should be sharing the Good News and helping the needy all the time, but especially at times like this when so many need real hope and even simple necessities like toilet paper.

Back in the Chicago area, my good friend Dave retired in early February. Dave has a boat and is hoping to find time to fish. He also has two grandsons and is hoping to spend more time with them. All of that will have to wait because the primary reason he retired is to have more time to share the Good News and to help others. He doesn’t just want to help his elderly parents and sick neighbors, but also people he doesn’t know. As I am typing this, Dave is trying to hunt down some toilet paper for a food pantry.

In some twisted plot to take over the world, an evil villain has cornered the toilet paper market. Right now, he’s standing in a giant warehouse of toilet paper laughing. I watched a lot of James Bond movies growing up. The truth is, a lot of good people stocked up on toilet paper and other essentials out of a concern for their loved ones. If you’re one of these people and you can spare some toilet paper and other staples, please consider donating some of your stockpile to the organizations helping the needy. It’s bad enough to be stuck at home, but being stuck at home without TP is cruel and inhuman punishment.

Even though he makes sure, they have everything they need, Dave’s eighty-something-year-old parents don’t like being told not to leave their home. This war on Covid-19 brings up horrible childhood memories for his mom. His parents are Serbian and immigrated to America in 1959. His mom is from Belgrade. When the Nazis invaded in 1941, they took her dad to a concentration camp and confined her mother and the kids to their home. His mom was just three years old. The Nazis placed antiaircraft guns in the neighbor’s yard, and the family spent many nights huddled in the basement during air raids. I understand why being told to stay in their home because an unseen enemy is lurking outside is frightening to them.

“Enemy-occupied territory—that is what this world is. Christianity is the story of how the rightful king has landed, you might say landed in disguise, and is calling us to take part in a great campaign of sabotage.” – C.S. Lewis

If you committed to follow Christ, you are a soldier fighting a very real war. Jesus is our Commanding Officer and, according to the 6th chapter of Ephesians, the Bible is our sword. It’s a spiritual war, and our actions, or inaction, will not only be seen in this life but throughout eternity. In this war, some of our most valiant soldiers are little old ladies going to battle in their prayer closets, their “war rooms.” In this war, even a completely paralyzed man without the ability to speak can fight. I refuse to retreat when the battle is heating up.

“For though we walk in the flesh, we do not war according to the flesh, for the weapons of our warfare are not of the flesh, but divinely powerful for the destruction of fortresses.”

We are fighting for a far better “country,” regardless of where on Earth we live. This current world is not our home, and we fight in the hopes of getting others to join us in the battle – this unseen battle.

(They/we) “…confessed that they were strangers and pilgrims on the Earth. For those who say such things declare plainly that they seek a homeland…they desire a better, that is, a heavenly country. Therefore God is not ashamed to be called their God, for He has prepared a city for them.” (Hebrews 11:3-16).

What follows is one of my favorite passages from C.S. Lewis’s book Mere Christianity:

“Hope is one of the Theological virtues. This means that a continual looking forward to the eternal world is not a form of escapism or wishful thinking, but one of the things a Christian is meant to do. It does not mean that we are to leave the present world as it is. If you read history, you will find that the Christians who did most for the present world were just those who thought most of the next. The Apostles themselves, who set on foot the conversion of the Roman Empire, the great men who built up the Middle Ages, the English Evangelicals who abolished the Slave Trade, all left their mark on Earth, precisely because their minds were occupied with Heaven. It is since Christians have largely ceased to think of the other world that they have become so ineffective in this. Aim at Heaven, and you will get earth “thrown in”: aim at Earth and you will get neither.” – C.S. Lewis

Mary and I read all of your comments. Other readers read them, too. If you have a prayer need, please mention it in the comment section so Mary and I can pray for you.

I present posts about God's Word, with a personal focus on how God's grace is received through saving faith in the Lord Jesus Christ... Sinners must understand and obey the Gospel of our Lord Jesus Christ... See this link for more... https://godsmanforever.com/2014/10/26/the-truth-about-sin-10262014-by-bruce-reposted-from-7112013/
View all posts by Godsmanforever →
This entry was posted in Daily Devotion, The War Of Faith and tagged Grace, Hope, Unshakable Hope. Bookmark the permalink.