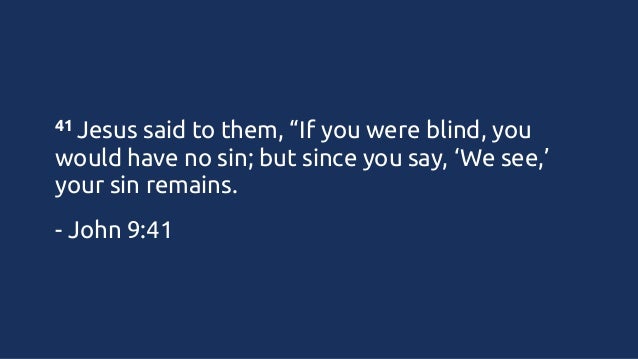 Jesus heard that the Pharisees had thrown the man out who was blind from birth, for he wasn’t going along with what the Pharisees wanted. When He caught up with the man, the man came to believe in Him and worshiped Him. This brings us to verse 39; why doesn’t anyone ever quote it?

Jesus said, “For judgment I have come into this world, so that the blind will see and those who see will become blind.” John 9:39

I would expect that if my next post was titled “Jesus Came to Judge the World” many, probably most, of you would object, but there you have it in His own words! Of course, He also said that He had not come to judge, as the atheists like to point out as they search for something to claim is a contradiction.

What shall we say then?

This is an unusual context, isn’t it? Jesus is playing on these words to show that the Pharisees have condemned themselves by their ruthless arrogance, for they claim to know all and see all, and yet when confronted with an amazing manifestation of the power and glory of God, as they were when this poor man received his sight, all they can think of is how to downplay the whole thing so they can keep their influence. So, they conjure up their little investigation into the facts of the case, but not before they have already determined its outcome, and in the end, they have kicked the once blind man out of the assembly because he had the audacity to tell the truth.

There were some Pharisees present who overheard this exchange; look at their condescension:

Some Pharisees who were with him heard him say this and asked, “What? Are we blind too?” (v. 40)

Can you imagine having that much attitude at that precise moment? Jesus explained:

Jesus said, “If you were blind, you would not be guilty of sin; but now that you claim you can see, your guilt remains. (v. 41)

In a simple one-liner Jesus smashes any hope they might have of saving the situation. Have you ever noticed that often it is the very person or persons who should know best, who refuse to accept the obvious if it proves a threat to their position and influence? Since they admit they have the knowledge, that they should know better, they cannot claim innocence, no, not ever.

I present posts about God's Word, with a personal focus on how God's grace is received through saving faith in the Lord Jesus Christ... Sinners must understand and obey the Gospel of our Lord Jesus Christ... See this link for more... https://godsmanforever.com/2014/10/26/the-truth-about-sin-10262014-by-bruce-reposted-from-7112013/
View all posts by Godsmanforever →
This entry was posted in Daily Devotion, spiritual blindness and tagged Gospel, Grace, John 9:35-41, spiritual blindness, unbelief. Bookmark the permalink.