Posted on December 21, 2020 by Godsmanforever

The Incarnation: Our Salvation

We have come to the season of the year when many people, in some way or another, acknowledge the birth of our Lord Jesus into this world. We call it the Christmas season. For many people, the season is mostly about parties and buying gifts for friends or loved ones. But for us who really know Christ, our hearts are filled again with wonder and love and gratitude because of the significance His incarnation has for the whole human family, right down to each one of us alive today.The reality is this: if there were no incarnation, we would have no salvation. Our Lord’s incarnation speaks of the fact that though He was God from forever, God incarnated Himself in His only begotten Son through the miracle of the virgin birth. He is completely unique in this regard. No other person in history had a conception and birth like He did. Fulfilling many prophecies of the Old Testament, the incarnation ushered in the fulfillment of God’s promise to save His Lost creation through a Messiah, with a special focus on humanity. 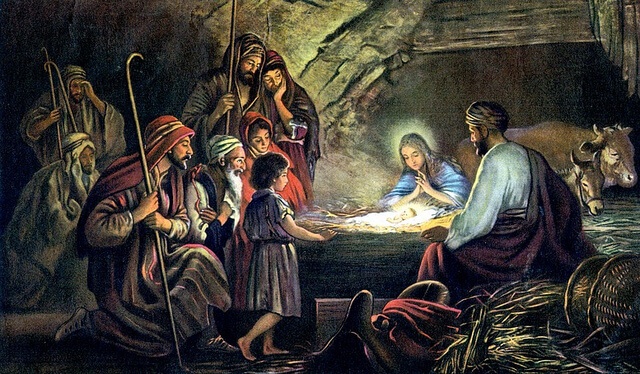 As God and man in the same Person, and as the only man who had no sin of His own, He was uniquely qualified to be the LAMB OF GOD, who would take away the sin of the world. This was the timeless plan of God. His name, JESUS, means Jehovah our Savior. When God gave Him that name through the angel, we were informed that it was given, because He would save His people from their sins. Had he not come and been born into the world, we would be without His saving, redeeming work. He was literally BORN TO DIE FOR US, in our place. By His death, He solved the sin problem we all have. He took our sin upon Himself and paid its wages, which is death.

We adore the babe in the manger who grew to manhood because of who He is and because of His divine achievements on our behalf. He is God and man in one Person. He solved our sin problem, and He solved our death problem. No one else in the history of the world could ever do this for us.

But there is still more to celebrate about the incarnation of our Lord. As God and man, He ascended back into heaven in order to open the door to the giving of His Holy Spirit to every man, woman, or child, who believes in and receives Him. As we celebrate His birth, we can also celebrate the second birth HE makes available to everyone who believes in and receives Him. Because He was born into this world, we can be reborn in Him!  When we receive Him, we are born again spiritually. We receive eternal life, because He is eternal life.

One final thought. He brought with Him one other promise: “and the government shall be upon His shoulders” (Isaiah 9:6-7). This speaks not only of His kingdom reign in the hearts of believers, where He now resides. It also speaks of His second coming. Our Lord Jesus Christ, God incarnate, will come again as promised and establish His kingdom over all the earth. He will dismantle all other systems of government, and He will rule in righteousness over the earth. This is the one bright ray of hope for a world that seems so out of control and in which, so often, evil seems to triumph. This promise is central to His gospel. So we can face the future with hope and certainty that His plan will prevail. All of this is guaranteed because that baby was born in Bethlehem.

Here at the Union Gospel Mission, we have it as our focused purpose to reach all who God sends our way with the love and the power of this gospel. That love and that power was all encapsulated in that little baby boy in the manger, for He grew up to be our Savior and, in love, to do everything necessary to rescue, redeem, regenerate and restore His kingdom on earth. At the Mission, this is the message we have the joy of sharing in every season of the year. And it is especially the heart of our celebration of Christmas. It’s the celebration of His incarnation, and it’s the celebration of our salvation!

Dear friend, be sure you have received Christ for who He is, and gratefully share with us the wonder of it all!

Sonny Westbrook worked in education for 15 years and in pastoral ministry for over 20 years. Now, he is the director of ministries at UGM where he has served for 8 years, caring for both staff and guests at UGM. He and his wife, Judy, have been married for 45 years and have four children and 12 grandchildren. Sonny’s greatest passion is encouraging Christians to see all they have been given in the person of Christ and to live in the fullness of His life.

Take time to meditate on Christ’s coming using the free devotional book below. 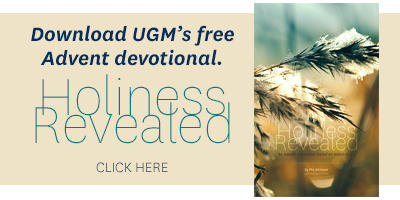 I present posts about God's Word, with a personal focus on how God's grace is received through saving faith in the Lord Jesus Christ... Sinners must understand and obey the Gospel of our Lord Jesus Christ... See this link for more... https://godsmanforever.com/2014/10/26/the-truth-about-sin-10262014-by-bruce-reposted-from-7112013/
View all posts by Godsmanforever →
This entry was posted in The Incarnation: Our Salvation and tagged Gospel, Salvation, Union gospel mission. Bookmark the permalink.

3 Responses to “The Incarnation: Our Salvation” 12/21/2020 Written by Sonny Westbrook, UGM Ministries Director