Posted on December 26, 2020 by Godsmanforever

Written by Nancy Ruegg for “From the Inside Out”  @  http://nancyaruegg.com

There’s a Song in the Air 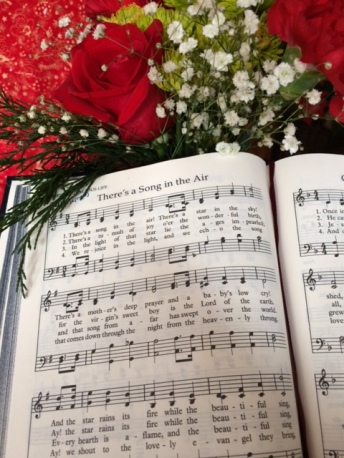 Does the title of this post sound familiar? That’s the name of an old Christmas carol—my maternal grandmother’s favorite. Sadly it never occurred to me to ask her why.

Perhaps it was the lilting tune that dances up and down the treble clef, with leaps from low notes to high. (You can listen to the carol here: There’s a Song in the Air.)

Perhaps Grandma especially enjoyed the expressive lyrics since she was a poet herself. I found this Christmas poem in her journal.  (Keep scrolling for a typed version–easier to read.):

Star of the East that shone for men

To guide to Jesus’ side,

Shines in the Christian heart today

Where the Lord Jesus abides.

For he’s the Bright and Morning Star,

He died on Calvary to save,

Baby Jesus was born a King,

A Savior to die yet to reign.

He left His home in heaven above

And chose instead earth’s pain.

Perhaps “There’s a Song in the Air” appealed to Grandma because her creative soul responded to such artful lines as these:

“The Angel Appears to the Shepherds”

I wonder if Grandma ever became curious about the origins of the carol? Did she know that the composer of the tune, Karl Harrington, discovered the lyrics while reading the works of one of his favorite authors Josiah Holland?

Holland was a novelist, poet, and editor of the popular Scribner’s Monthly. In the 1870s he reprinted his Complete Poetical Writings. This was the book in which Harrington found the poem “There’s a Song in the Air.”

At the time, the summer of 1904, Harrington was struggling through an overwhelming assignment: to compile a new hymnbook for the Methodist Church. Even for someone with his background as a highly trained musician, choral director, and composer–the task proved difficult. 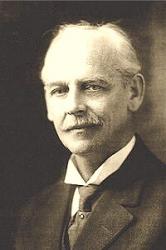 While taking a rest one hot afternoon, he picked up Harrington’s book, came across the poem, and immediately felt inspired to set the lovely verse to music.

He went to his organ and as he read the words aloud, let his fingers drift along the keys. A melody soon began to form. Harrington included the carol in the new hymnal.*

Perhaps like Harrington, my grandmother appreciated the fresh wonder stirred up by such inspiring lines as: 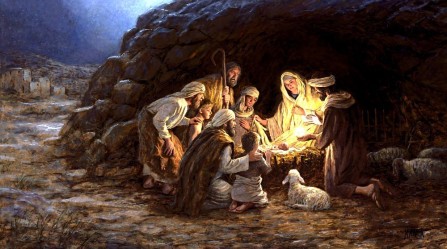 Grandma didn’t know Jesus until her mid-thirties, and up to that time had endured several painful traumas. (You can read a bit of her story in the post, The God of Rachel, Henry, and Clara Part 2.) But her newfound relationship with God brought peace and strength. 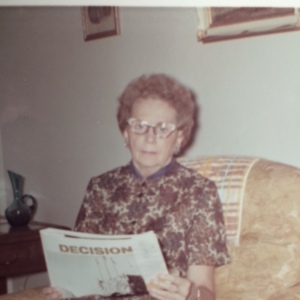 P.S.  Those glasses were the height of fashion back then!)

Perhaps a carol about joy, light, and song reminded her of the transformation Christ had brought to her life.

Grandma would want these lyrics to speak to our hearts too, refreshing our wonder in a Savior once cradled in a manger, destined to be King, who comes to us with “the lovely evangel” (verse 4, line 3)–the good news of God’s gracious plan to rescue us.

Hallelujah and a blessed Christmas to all!

P.S.  When there is no other place to turn…turn to God !!  If you’re not a “born again” Christian, is the Holy Spirit urging you to open this link ??  Here is the truth for this most important days writing, about how God’s grace is received to become a Christian in God’s eyes; through understanding and obeying the gospel of our Lord Jesus Christ…   https://godsmanforever.com

I present posts about God's Word, with a personal focus on how God's grace is received through saving faith in the Lord Jesus Christ... Sinners must understand and obey the Gospel of our Lord Jesus Christ... See this link for more... https://godsmanforever.com/2014/10/26/the-truth-about-sin-10262014-by-bruce-reposted-from-7112013/
View all posts by Godsmanforever →
This entry was posted in Daily Devotion. Bookmark the permalink.