Posted on September 15, 2021 by Godsmanforever 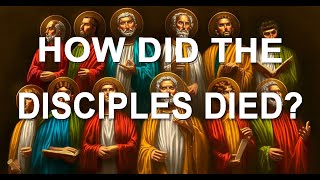 I have posted this today because I thought it was interesting…  I can’t vouch for it’s actuary, as you can read in the disclaimer below…

How The Disciples / Apostles of the Bible Died

Disclaimer: Other than Judas & John, these are not Scriptural. Some are historical, some passed down

by Christian traditions and are consistent with how they would have been treated in their time.

by the idolaters of Armenia (Western Asia near Turkey). The most travelled of the Disciples after

Judea. His accuser was converted by James’ courage & the two were beheaded together.

thrown from a pinnacle of the Temple at Jerusalem , then stoned and head bashed in with club.

meet a martyrs death. Banished by Roman Emperor Domitian to Isle of Patmos where penned

Revelation, the last book in the Bible. Was later freed & went to preach inTurkey and died at 100.

at city of Edessa [Turkey] while on a missionary trip that went to Persia (Iran).

Gospel in Ethiopia (Africa) and was killed for questioning the morals of the king.

up-side-down at his request because he did consider himself worthy to be crucified like Jesus.

preaching to death 54 AD in Heliopolis, Egypt. Preached in Phrygia which was in the Roman

Province of Asia near Ephesus [Turkey].

have ministered mostly in Jordan. Martyred by crucifixion in Britain in 74AD and then sawn in half.

and in Kerala, [southern India] where yet today the Mar Thoma Church exists.

refused to deny his faith in Jesus. He survived the fall and was beat him to death with clubs.

P.S.  When there is no other place to turn…turn to God !!  If you’re not a “born again” Christian, is the Holy Spirit urging you to open this link ??  Here is the truth about how God’s grace is received to become a Christian in God’s eyes; through understanding and obeying the gospel of our Lord Jesus Christ…   https://godsmanforever.com

I present posts about God's Word, with a personal focus on how God's grace is received through saving faith in the Lord Jesus Christ... Sinners must understand and obey the Gospel of our Lord Jesus Christ... See this link for more... https://godsmanforever.com/2014/10/26/the-truth-about-sin-10262014-by-bruce-reposted-from-7112013/
View all posts by Godsmanforever →
This entry was posted in How The Disciples / Apostles of the Bible Died and tagged Disciples of Christ. Bookmark the permalink.