Posted on September 28, 2022 by Godsmanforever 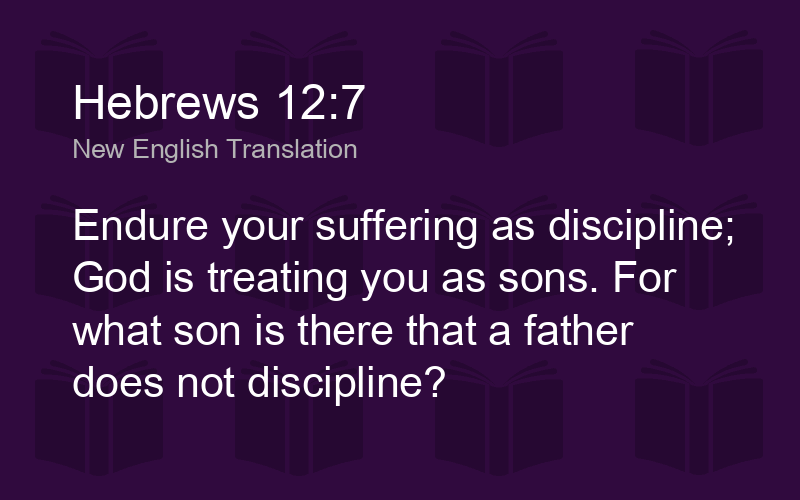 Written by  Keith Haney for “THE LIGHT BREAKS THROUGH” @ https://alightbreaksthrough.org

The Purpose of Discipline in the Christian’s Life

4 In your struggle against sin, you have not yet resisted to the point of shedding your blood. 5 And have you completely forgotten this word of encouragement that addresses you as a father addresses his son? It says, “My son, do not make light of the Lord’s discipline, and do not lose heart when he rebukes you, 6 because the Lord disciplines the one he loves, and he chastens everyone he accepts as his son.”

This is a book of the Bible that we don’t know for sure who wrote the letter, but we know very well why it was written.  The author makes it clear from the beginning that this letter is addressed especially to first-century Christians who had previously believed in Judaism. It may surprise you, but the overwhelming percentage of the first Christians were Jews. But think about the fact that Jesus was himself born into a Jewish home.  All 12 apostles were Jews. Jesus told his disciples to go into the whole world and preach the Gospel to every nation, but probably a full decade went by before there were many Gentiles in the church.

At the time the Letter to the Hebrews was written, Christians were frequently suffering severe persecution. The times were such that to be a Christian often meant to put your life on the line. It is understandable that some believers began to lose heart. Some began to deny the faith they had once embraced. So it was that an apostolic leader wrote this book that we call “The Letter to the Hebrews”; he was trying to persuade faltering believers to hold steady. The letter was written especially to persons who had formerly been part of Judaism. The letter explains that the events in the Old Testament were intended to prepare the world for the coming of Jesus. The letter quotes frequently and at length from the Old Testament, so the better you know the Old Testament, the better you will understand the Letter to the Hebrews.

With that as a backdrop, chapter twelve talks about the purpose of discipline.  It reminds me of a story about Susanna Wesley.

Susanna Wesley, mother of Charles and John Wesley, is perhaps the classic illustration of one who pursued discipline early in a child’s life. She believed the assertive self-will of a child must be broken at a young age by the parent. One of the rules in her “plan of education” was

“When turned a year old (and some before), they were taught to fear the rod and to cry softly, by which means they escaped abundance of correction which they might otherwise have had. . ..

In order to form the minds of children, the first thing to be done is to conquer their will.” (Cited by Rebecca Lamar Harmon, Susanna, Mother of the Wesleys [Nashville, Tenn.: Abingdon, 1968], pp. 58.)

The Purpose of Discipline

The biblical concept of discipline has both a positive side (instruction, knowledge, and training) and a negative aspect (correction, punishment, and reproof). Those who refuse to submit to God’s positive discipline by obeying His laws will experience God’s negative discipline through His wrath and judgment.

As we know the Christian life is hard. It’s hard being tempted. It’s hard living for God in a hostile world. It’s hard when other people seem to be getting on perfectly well without God.

But look at it this way. God is raising us as his children—and he wants us to be the best. He allows us to go through some tough experiences, to get us spiritually fit and strong. It’s a sign that he cares—that he wants us to be holy. Like him.

How did the Hebrew believers scatter around the world and face persecution heard this section?

“My son, do not regard lightly the discipline of the Lord,

nor be weary when reproved by him.

For the Lord disciplines the one he loves,

and chastises every son whom he receives.” [1]

“For what son is there whom his father does not discipline? If you are left without discipline, in which all have participated, then you are illegitimate children and not sons.[2]”

We all know those kids who seem to get away with some of the most troubling behavior.  When we see it what goes through our minds? “There is no way I would let my kids behave like that!”

The writer makes a less to the greater argument here:

If a human father is given respect for their discipline, then God deserves reverence.

Besides this, we have had earthly fathers who disciplined us, and we respected them. Shall we not much more be subject to the Father of spirits and live? [3]

Our earthly fathers did the best they could, but their perspective was limited. God on the other hand, “Disciplines us for our good.” It is done so we might share in His holiness.

Three Lessons from the text:

As a wise man once said of this journey we call life, “Only a fool would pretend to understand suffering fully and only a sadist would claim to enjoy it. But this at least can be said. There is in the struggles of life a catalyst for spiritual development which no other force can supply. Pain has the power to summon forth from us that which we find most difficult to surrender—uncompromising faith in God and unqualified love for God.”

C.S. Lewis describes the role of suffering in the life of the believer as “soul-making.” It is the shaping of the Christian with te hammer and chisel of adversity. Lewis also said, “God whispers to us in our pleasures; speaks in our consciences, but shouts in our pains.”[4]

I present posts about God's Word, with a personal focus on how God's grace is received through saving faith in the Lord Jesus Christ... Sinners must understand and obey the Gospel of our Lord Jesus Christ... See this link for more... https://godsmanforever.com/2014/10/26/the-truth-about-sin-10262014-by-bruce-reposted-from-7112013/
View all posts by Godsmanforever →
This entry was posted in The Purpose of Discipline in the Christian’s Life and tagged discipline, Hebrews 12, Holiness, persecution. Bookmark the permalink.